Going off of what I wrote last time, I wanted to talk about the things that I did purchase over the past couple of months. Going into this (and inspired by TThe Anna Edit videos on capsule wardrobing), I made a list of items that I was interested in, all of which I knew I would use regularly and would keep for a while. (But not in that “poofy free tutu skirt keep-for-a-while” way that I talked about in the other post.) Here’s what my list looked like:

As for where I wanted to get these, I knew that some of them I would probably end up getting new because of trendiness or specificity (checked blazer, “nice black blouse/top”) and some that I wanted to buy secondhand because of them being more generic (“sort of oversized navy sweatshirt”) or specific in another way (like the navy wool coat, the style of which I wanted I could find easier by doing it secondhand and a wool coat is cheaper used).

The items with the checks next to them are the ones I’ve purchased; the ones without, I’ve decided not to buy unless I can get them secondhand. There have also been a couple things I’ve gotten in recent months that are not listed: a pair of black Gap jeans that were on sale because I wear black jeans constantly and a pair of mine were falling apart, and also this Madewell camo jacket just because I LOVE it. I’m wearing it all the time and love that it’s cotton.)

Here are the things from the list I did get: 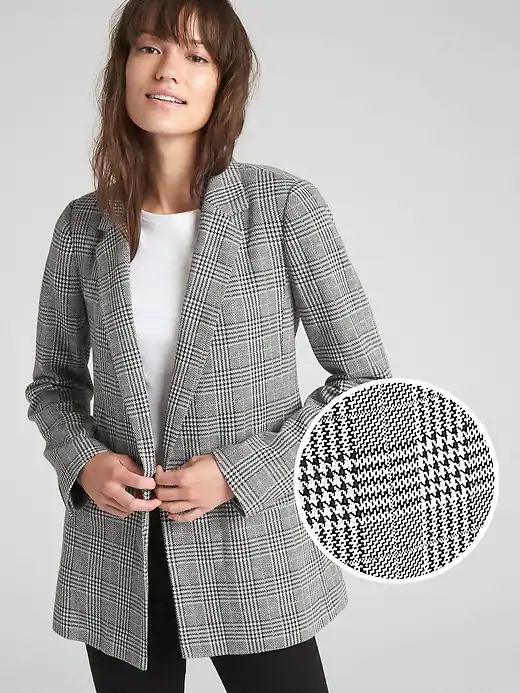 If you’re interested in this, I found that it runs kind of big (and I have fairly broad shoulders). Worked out for me, though, because the only size they had left in store was one that I originally thought would definitely be too small for me.

Navy Dotted Dress — Well, I got one at Uniqlo, which you’ll have to take my word for because it is no longer available and also I can’t find a photo of it anywhere online. Weird.

Pleather Jacket — New Look (from Rainbow. I don’t think the one below from ASOS is the exact one, but it’s very similar)

I had one of these previously, wore it for a few years, and it disintegrated. (OK, disintegrated might be a little extreme, but it was doing that peel-y thing.) 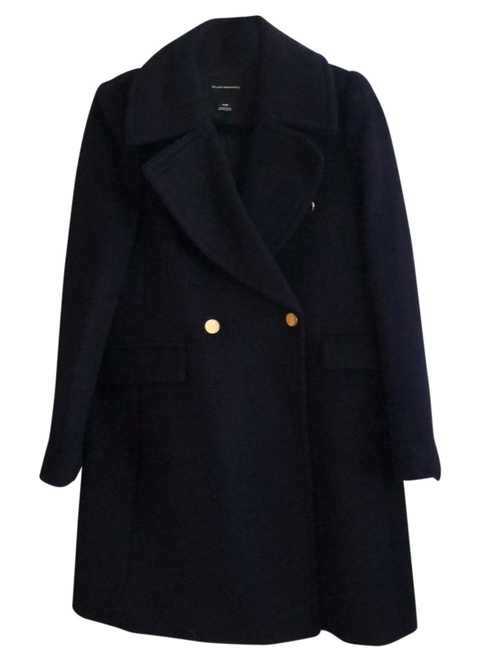 Other than the coat (because it’s not quite cold enough yet), I’ve worn all of these already and can see how they’ll easily continue to come in handy. As for the other items on the list, I probably wouldn’t get a jean jacket at this point because it’s too cold, but that’ll be a good thing to thrift in the spring if I’m still interested. I was really into this leopard Topshop bag but was on the fence about buying it new, so that’s how that ended up on there. (Also, ughhh, I just found out through doing this that it’s on sale on the Nordstrom site…) I would still be interested in a leopard bag, as well as still interested in the sweatshirt, if I find it secondhand. Brown ankle boots are probably a no-go (these are the ones that inspired that list item), but I did just buy a used pair of red boots off Poshmark that didn’t arrive yet.

I’ve definitely had an easier time getting dressed recently — not just because of the new things, but because of there being less. It’s not even that I was wearing all of it (or that there was really that much) so it’s not like I had to actively decide not to wear so many things, but I think it’s just easier on the brain to not see many options. I don’t want this to come off like I’m going to stick to a certain schedule with buying any new stuff (I don’t have a schedule… at least not yet… for starters) or that I’m an expert on anything, including by not limited to being more green with shopping. I really just want to be doing more thrifting and being sure to fully think things out when I do buy new things. I want to share some pics of these items in action (prooobably with mirror pictures because I am me and not a fancy lady) and also some stuff about shopping secondhand online, so hopefully that’ll be coming up. (I say hopefully like it’s not totally in my control… I know how I can get with posting.)

One thought on “what i bought for fall”

Welcome to Or Something, a blog about fashion, interiors, and other things I feel like being long-winded about. Read more about me here.