I could say that the reason I haven’t blogged for so long is because I was waiting for a full six months with the mattress before I did my Tuft & Needle review, but that’s not the case. Just been lazy, and it just so happened that the post that made sense to write next was this one.

As has actually been documented here (unlike anything else for the past couple of months), we moved into this apartment in November. At the time, we decided to switch out some of our furniture. We sold our Ikea Tarva full size bed frame and bought a queen size one, both on Craigslist. Accordingly, we also ditched our very old spring mattress, which belonged to Michael for a very long time, before we were even together. It was looking and feeling rough. 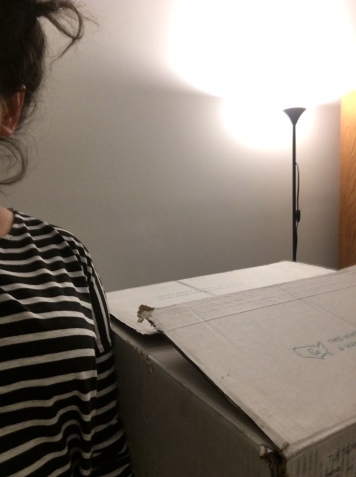 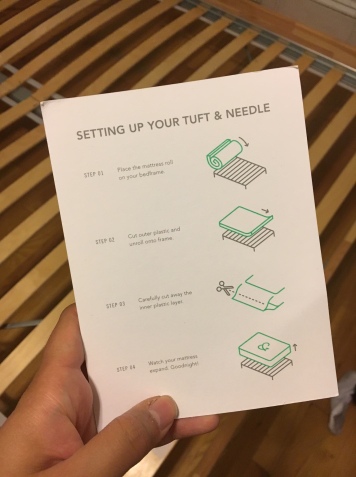 Because we live in New York and don’t have a car, the best option was for us to order one of these new fangled order online mattresses that inflate before your eyes. After researching some reviews and looking around at the prices, we decided on Tuft & Needle, which was $575 for a queen, base price. Shipping was free and, for us, with taxes the total came to $626.

I’ll just start by saying, the process of actually receiving the mattress was easy and SO FAST. The mattress arrived within two days of ordering it, which was great since we had been sleeping on an air mattress for the few days between when we moved and received the new mattress. 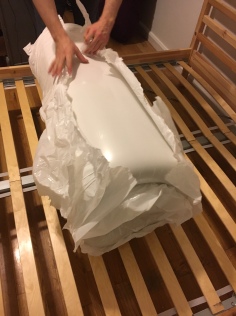 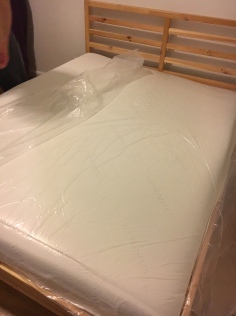 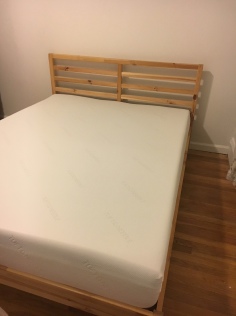 It arrived in a big box. (As you can see in the pic above, I took a picture of myself standing next to it, and it came up to my shoulder. I’m 5’2″.) Basically, you just take it out, unroll it on to your bed frame, and very carefully cut off the plastic wrapping. (This process involved a lot of me going, “It’s puffy!” “I like it!” “It’s already puffy!”) Reading reviews, I had heard that it didn’t have a smell, but still, I was shocked to find that it didn’t have a smell. I’d bought mattress pads before and those reek for the first few days; this is basically a much larger version of that — a giant piece of compressed foam wrapped in plastic — so shouldn’t it smell up my apartment for weeks? Nope. It was just neutral from the start, which meant we got to sleep on it right away.

That first night, I already liked the mattress, and it’s been six months now, and I’m still enjoying it. Some reviews I read online — not just for this mattress, but any new mattress — talked about having to get used to it and adjust. But I guess my standards were just so low from years of the ancient mattress that I didn’t have to go through that? I mean, that one was so uncomfortable (we had a mattress pad on it, but even still), that I think anything would have been an upgrade for me, so I liked this one right away.

I do feel like after months of sleeping on it, though, I can say that I do really like this one, and not just as compared to the old one. It’s definitively not a firm/hard mattress, but I think it’s really comfortable. Doesn’t sink in too much. The only thing I could even put as a negative is that if you sit on the edge, that part sinks in a lot, but that’s more just something you notice if you want to sit on the edge to put on your shoes or, you know, kneel on the edge to reach a water glass you left on your dresser because you don’t feel like getting all the way up. Overall, I’m really happy with the purchase and would definitely recommend Tuft & Needle, especially considering the price and how convenient the whole process was.

Welcome to Or Something, a blog about clothes, interiors, and other things I feel like being long-winded about. Read more about me here.